My wife, watching two young girls scoot around the dolphin fountain in Kelowna, texts me: “Column topic – those e-scooters look dangerous as hell. Going faster than a bike – no helmet and way more potential of falling.” 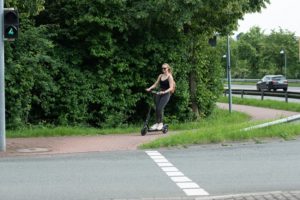 Another text: “Next column topic – if they run into and injure someone – how do they recover compensation.”

OGO Scooters launched Western Canada’s first rideshare scooter program in Kelowna within the last couple weeks. Is there anything to be concerned about?

While brand new to Western Canada, we can look to the experiences of our neighbours to the south for an idea of what to expect.

An April 17, 2019, report of the National Association of City Transportation Officials estimates that 38.5 million trips were taken on shared e-scooters in the United States in 2018.

And their safety has been studied by reviewing data collected from hospitals. That data understates injury statistics because only the most serious of injuries would result in a trip to a hospital.

One study was conducted in Austin, Texas, where e-scooters first appeared in early April, 2018.

The study identified 190 e-scooter related casualties over an almost three month period from September 5 and November 30, 2018.

Over one-third had sustained a fracture. Of those, 19% had fractures over multiple areas of their bodies. 15% of all those injured had evidence suggestive of a mild traumatic brain injury. 3% had fractures involving the head.

E-scooters had taken Austin, Texas by storm, though. There had been close to a million e-scooter trips over that same time period. The authors of the study estimated an injury rate of approximately one casualty for every 5,000 trips.

Perhaps not unexpectedly, approximately one-third of those injured had been on their first e-scooter ride. There’s an important caution for those, like me, who might feel capable of hopping on even though I’ve never even been on a manual or “kick” scooter before.

What about pedestrian safety?

In this news report, OGO co-owner, Chris Szydloski, was quoted as saying “Our key focus is safety…”. With regard to speed, the report notes that “While they have top speeds of up to 45 km/hr they will be regulated by geographic area so will go very slowly in congested areas and up to about 25 km/hr in less congested areas.”

I don’t know if my wife’s observations support that assertion. And 25 km/hr is quite a clip!

There might be good reasons why several large cities, including New York City and St. Louis, have banned e-scooters, as indicated by this report.

Does the risk of injury to users and innocent pedestrians outweigh the value of e-scooters?  As fun as they might be, I don’t see the kinds of transportation and environmental benefits flowing from e-scooters like I do from their larger and safer cousin, the e-bike.

Next week I will answer my wife’s second query:  who do you turn to for compensation if you are injured by an e-scooter rider?