“Lipstick on a pig”. That analogy for reintroducing photo radar without using the words “photo radar”, makes me smile. 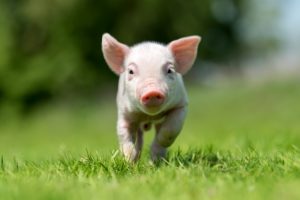 I grew up on a mixed farm in Saskatchewan and pigs were a part of our small operation. They were “free range”, able to root around in pasture areas. Oh my goodness they’re sweet animals!  And not just the brand new piglets.

Beauty is very much in the eye of the beholder, but I think they’re beautiful as they are. No need for lipstick. But it would be hilarious seeing someone try to apply it!

The analogy was used by Ian Tootill who, according to the SENSE BC website, co-founded a grass roots organization called SENSE (Safety by Education Not Speed Enforcement) in April, 1995. The organization was formed in response to an NDP / ICBC campaign promoting the planned introduction of photo radar in 1996.

According to their website, they fought the campaign “…by spreading the truth about a program that had little to do with safety, and in our opinion everything to do with fleecing motorists.”

They failed to block the NDP’s introduction of photo radar in 1996. But by the next election they had churned up enough public dissatisfaction that the BC Liberal party were able to leverage it into a winning campaign by promising to dismantle the program, which they did in 2001.

The program indeed fleeced motorists. According to a Globe and Mail article published in June, 2001, revenues from the previous year’s tickets, generated from thirty photo radar vans were expected to raise revenues of nearly $12 million.

If we’re worried about fleecing motorists, this go-around is dressing up a pig in a dress, pearls and high heels.

There are 140 red light cameras which have been automatically issuing tickets when drivers blow red lights. They are also equipped to monitor speed.

According to a Vancouver Sun article, an average of 10,500 vehicles per year blow through each of the 140 intersections at 30 or more kms/h above the posted speed limit.

The fine for going 30 kms/h over the posted limit is $196.00. The plan is to configure cameras at 35 of the intersections with the highest collision rates to automatically issue speeding tickets. If driving behaviours don’t change, that’s an average of $72 million per year of additional speeding ticket revenue.

Is the government motivation a road safety one, to reduce speeds at these high risk intersections?  Or is it to fleece motorists?

Unlike the previous photo radar piggy, with sneakily placed unmarked vans, this dressed up one will come with warnings. They will be putting up warning signs so speeders can temporarily become safe, law abiding citizens until passing through these intersections.

They will make money on only the most absent minded of lead footed drivers, i.e. those whose driving inattentiveness extends beyond failing to pay attention to their speed, to also failing to notice the warning signs.

And if those are the drivers who will be filling government coffers, I don’t really care about the government motivation. Perhaps a few tickets in the mail will increase their pathetic level of attentiveness.

In fact, I say they should convert the cameras at all 140 intersections.

Next week I’ll explain why they should also do away with the warning signs.