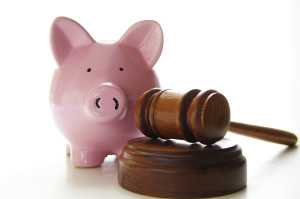 In a judgment released on November 17, 2015, an Ontario Superior Court Judge lambasted the way a prominent class action law firm gets paid.  The judgment provides an important lesson.

I have written in support of class action lawsuits and I maintain my support.  The problem in this case wasn’t the class action itself, it was the prosecuting lawyers’ arrangement for getting paid.

The claim had to do with premature deterioration of the rubber grips on some Sony Playstation 4 video game controllers.  When returned for repair or replacement, customers were improperly charged a shipping fee.

This kind of case is perfectly suited to a class action proceeding.  It would make no sense at all for any, single, victim of the improper charge to bring a lawsuit against Sony seeking reimbursement.  Put all the victims together, though, and the combined claim might be large enough that a lawsuit makes sense and a huge company can be held accountable to help prevent future injustice.

Class action lawsuits can be incredibly lucrative for the lawyers who pursue them.  In this case, the prosecuting law firm, Merchant Law Group (“MLG”), had estimated that anywhere from several thousand to several hundred thousand people had been wrongfully charged.  At the agreed reimbursement amount of $20.00 per victim, legal fees on a contingency basis could be millions of dollars.

Ironically, because of the court’s chastisement of MLG’s legal fees arrangement, and perhaps comically, MLG’s estimate was off.  Only approximately 400 customers had sent their controllers back and been improperly charged by Sony.  The resulting settlement was $8,000.00.  It was suggested by Sony’s lawyers “…that this could be the smallest Canadian class action settlement on record”.  In short, it was not a lucrative endeavour for MLG.

Class action settlements, however small, have to be approved by the court, which brought this one before Mr. Justice Belobaba.  The court was also required to determine MLG’s entitlement to legal fees, which is what led to MLG’s legal fee arrangement being examined and lambasted.

MLG’s arrangement with its clients was described by the court as follows: “don’t worry about our legal fees, we’ll get the defendant to pay them as part of the settlement agreement”.  This arrangement had MLG negotiating two things with the defence:  one was compensation for their clients; the other was their legal fees.

The glaring conflict of interest between lawyer and client was identified by Mr. Justice Belobaba as follows: “…legal counsel is not only motivated to negotiate a settlement in almost any amount, his or her very involvement in the negotiation with the defendant creates a glaring conflict of interest because every dollar that can be deducted from the class members’ settlement amount is a dollar that can potentially be added to class counsel’s legal fees amount.”

Mr. Justice Belobaba chastised the arrangement in the clearest of terms: “It must be obvious to anyone who gives this even a moment’s thought, that this type of settlement-driven legal fees arrangement in class action litigation is fundamentally and profoundly unacceptable.”

He expresses his shock as follows: “I must confess that I was somewhat shocked to hear this.  An experienced class action firm was telling me in open court, and with a straight face, that “many” of its class action legal fee arrangements were like the one that was before me…”

It might well be that the lawyers at MLG are ultra conscious about the glaring conflict of interest between themselves and their clients, and carefully negotiate their own legal fees in such a way that results in fair results to their clients.  As much as we try to avoid them, conflicts of interest between lawyers and clients are ever present, regardless of the fee arrangement.

Lawyers billing by the hour face the conflict of interest that the more hours they spend, the more money they make, each dollar coming out of their client’s pocket.  Lawyers billing on a contingency fee arrangement face the conflict of interest that quick settlements at inevitably low settlement amounts are more lucrative than spending the time and money to properly work up a case to achieve full and fair compensation.

This is not unique to lawyers.  This applies to all hourly rate and percentage fee service providers, from automobile mechanics to realtors.

The bottom line is that we are all at the mercy of the service provider, to some extent, and great care needs to be taken to choose those who are worthy of our trust.