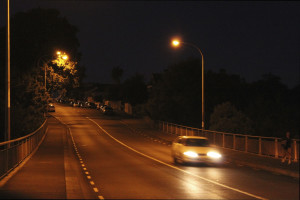 Do you remember taking your driver’s licence road test?

You have to make sure to come to a complete stop at a stop sign.  As if that isn’t enough, you also have to stop behind the crosswalk if you don’t want to fail.

Ever wonder why bumping the curb in the parallel parking part of the test isn’t an automatic fail?

There’s no law that says you have to slide perfectly into a parking spot at the first attempt.  There happens to be a law, though, that specifically says that you must stop your car behind the crosswalk.

Perhaps it’s because people don’t die when you bump a curb.

Am I being overly dramatic?

Even if you have to stop for traffic, there’s usually no need to stop behind the crosswalk.

There are a whole lot of other rules of the road that aren’t all that important, most of the time.

The majority of people could probably go through their entire lives disregarding the strict rules of the road, with the only consequences being a few traffic tickets.

Perhaps this lack of consequences is what leads some people to think it is “cool” to show a disregard for the rules, and to follow them only when there’s an R.C.M.P. cruiser nearby.

As unlikely as it may seem in your day to day driving, it really does happen that a jogger will come out from behind a hedge and enter a crosswalk at precisely the moment a car is pulling up. If you don’t make it a practice of following the rules, and regularly roll through cross walks, you are playing a nasty game of Russian Roulette with someone else’s future.

What a pain in the behind it is to slow down to 30 kms/hour in school zones.  Most of the time, children are safely in their classrooms, and it would make no difference if you roared through at 50 kms/hour. It really does happen, though, that a student, late for school, will dart across the street without looking both ways.  If that happens in front of your car, and you are paying attention, you can stop if you are going 30 kms/hour.

How about this for a crazy proposition.  If everyone followed the rules of the road, there would be no car crashes.

Have a look at the Motor Vehicle Act. You show me a car crash, and I’ll show you where someone broke a rule that was imposed by our legislature to prevent crashes.

If car crashes are caused by drivers who break the rules, is it fair to call them “accidents”?

Is it an “accident” if a bullet is fired during a “game” of Russian Roulette?

I challenge you to put me out of business.  Every time you get behind the wheel, drive as though you are taking a road test.  Don’t just smarten up when there’s an R.C.M.P. cruiser nearby.