How would things have been different had the crash not occurred? 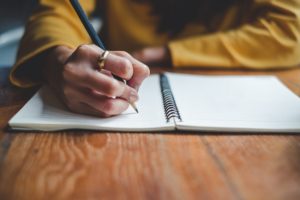 This is a sequel. Last month I recommended that crash victims journal something nobody ever thinks of journaling: how you were before the crash. I promised to pick up from there.

A reminder of why we journal: Because our memories fade.

From time to time during a personal injury lawsuit, perhaps 2-3 or more years after a crash, you will be asked how you had been before.

And your answers, drawing from a faded memory, are likely to be vague and unreliable.

But if you journal that pre-crash condition when your memory is still crisp, you can look back at that journal and refresh your memory.

That picture of your pre-crash condition is critical when answering the key question in every personal injury case: How would things have been different had the crash not occurred?

Because it is that difference that you are compensated for.

Let’s say your physical and mental wellbeing (your “condition”) after having followed through with all prescribed care, and allowed “time heals” to run its full course, is assessed as 500 units.

We don’t assess condition with units, by the way. This is just an illustration.

And let’s say that had you done the journaling I recommend, you could have refreshed your memory and crisply described your condition immediately before the collision as 600 units. Arguably, your ongoing loss would be assessed at 100 units.

If a constant, stable one, i.e. you had been sitting at 600 units for years leading up to the crash, it is likely that you would have held at that level for the long haul had the crash not occurred.

But if your condition had gradually been getting worse, the pace of that deterioration is a critical factor when predicting how things would have transpired.

And what if your condition had been gradually getting better? A mid-life crisis led to a transition to healthy living. For three years, you had been gradually losing pounds and becoming more and more physically fit. Your pace of improvement would likewise be a critical factor when predicting what your future would have been had the crash not occurred.

Our legal system relies on those with medical and psychological expertise to gaze into the crystal ball to predict how you would have been had the crash not occurred. Their ability to do that is greatly enhanced by a clear and credible description of your condition, and trends in your condition, leading up to the crash.

Without your description, they are left to piece things together based on clinical materials, i.e. the notes and documentation that get added to the files of your doctors and therapists when you consult with them. I’ve written before about how incomplete and misleading those materials can be, standing on their own.

Please ensure that those you care about learn about and follow this important advice if they are injured in a crash.

You might also enjoy the below columns also regarding journaling:

You might also enjoy the below columns regarding problems with clinical records: