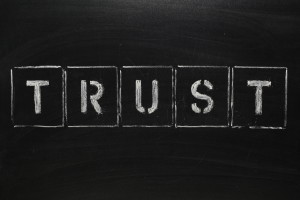 It’s ICBC’s trademark.  ICBC spends a lot of money, our money, building a brand of trust and confidence and that trademark is an important part of the branding.

Their brand is so important to them that in August, 2012, ICBC took its employees to court to protect it.  As a form of job action, employees had been including “We work, you drive; we both deserve better” in their e-mail signatures instead of the trademark.  ICBC said that it was hurting their brand.  They were successful in forcing the employees to continue promoting their brand.

Every piece of correspondence, written and electronic, includes that trademark.  It is on every page of their web site and every pamphlet they produce.

The problem comes from the two hats an insurance company wears.

It would be okay if your adjuster clearly told you: “Look, I know that every e-mail or letter I send you says “building trust. driving confidence.”, but when I am negotiating your personal injury claim, you cannot trust me as far as you can throw me”.

Instead, the insurance adjuster will actively build on the brand that you, as a tax and insurance premium payer, have helped create, encouraging you to trust him or her and discouraging you from consulting with a lawyer which is the only way you can get the straight goods about your rights.

I jump to clarify that insurance adjusters are wonderful human beings who are simply doing their job they have been hired to do, which is to pay as little as possible in the settlement of claims.  They are following ICBC policy as they are required to do and as ICBC has shown they can force them to do.

This results in unfair settlements and, as noted in the recent case of Tolentino v. Gill, 2012 BCSC 1383, the complete loss of claims.

Mr. Tolentino’s adjuster had advised him that it was not necessary to have a lawyer while failing to mention that a limitation period was coming up and his right to fair compensation for his injuries would expire in six months if important legal steps were not taken.

The judge noted that she was “…disturbed by the adjuster’s approach in this case”.   She expressed her view: “…her failure to make any attempt to contact him before the limitation period expired was in my view unreasonable.”

The judge concluded, referring to the adjuster’s failure to make any attempt to contact Mr. Tolentino before the limitation period expired:  “Although she did not have a legal duty to do so, given her knowledge of the claim, this would have been a more reasonable and fair approach.”.

The judge had no choice but to dismiss the claim.  As I said, the law is clear.  The adjuster had no duty to be reasonable and fair.

I wish that ICBC was as clear to British Columbians when negotiating personal injury claims.