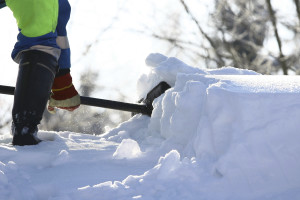 My father lives down the street from me.  A little unsteady on his feet, he makes the short walk to visit several times a week.  His legs aren’t what they used to be; he was born in 1935.

His house is in a cul-de-sac, which has become a virtual sheet of ice.  The snow plow operators don’t give the small roundabout the same attention as the street.

He has to make his way over that sheet of ice, and then across the street, to get to a sidewalk.  The sidewalk isn’t much better.  It’s excellent, down to the concrete, in front of some houses, but it’s safer to climb over the plow swath to the street in front of others whose owners have not been so diligent.

Some people care more than others about the appearance of their yards and the sidewalks in front of them.  Retired folks have more time on their hands than those of us workaholics who are at the office all the time.  Some people care, but have physical disabilities that limit their ability to do the physical work involved.

At a family Christmas gathering I brought up the subject of the responsibility of home owners to keep the sidewalks in front of their homes clear of ice and snow.  Those I brought the subject up with seemed of the impression that it’s a matter of moral, not legal, responsibility.

When I raised the prospect of a bylaw actually requiring home owners to keep sidewalks free of snow and ice, I was met with the suggestion that it would be as ridiculous as having a bylaw requiring us to clear ice and snow from City Hall.  We don’t own the sidewalks.  How could their condition possibly be our legal responsibility?

Ridiculous or not, believe it.  Bylaw 8120 in the City of Kelowna and bylaw 0071.01 in the District of West Kelowna make it so.

The two bylaws are very similar, each requiring homeowners to remove accumulated snow or ice within 24 hours.

Do the municipalities enforce the bylaws?  Apparently not, at least not on my street.  If they did, I would have been one of those issued a fine.  It was just the other day, after much longer than 24 hours of snow and ice had accumulated on the sidewalk in front of my house, when I got it down to the cement.

It took a comment from my father to clue me in to the dangerousness of the situation.  As an able bodied fellow, I have no problem clambering over snow piles and sliding on slippery surfaces.  The condition of our street didn’t seem dangerous through my able-bodied eyes.  It hadn’t occurred to me that I was contributing to a dangerous situation on my street for those like my father.  Yes, I am embarrassed by that lack of insight.

On researching this subject, I saw that the municipalities did take steps to try to bring these bylaws to the attention of the public.  Those steps were insufficient, though, at least for some of us.

Will knowing about the bylaw cause us to rush out with our shovels to clear snow and ice within 24 hours of accumulation?  Without diligent enforcement, I doubt it.

What will it take to make our sidewalks safe?  Perhaps bylaw enforcement officers should be patrolling our streets, issuing fines.  By failing to do so, perhaps our municipalities are complicit in the dangerous state of our sidewalks.

If us homeowners don’t like taking on the responsibility to keep public property in front of our homes safe, then we should encourage our municipalities to increase taxes so that they will have the financial resources to plow and sand our sidewalks like they plow and sand our streets.

I’ll leave you with the reality that with legal responsibility comes legal liability.  If my father or another pedestrian slips, falls and hurts themselves on the sidewalk in front of your home because of your failure to keep it clear of ice and snow, expect to answer to the injured victim’s civil claim for fair compensation, a claim that is bound to be enforced by the court because of the bylaw.