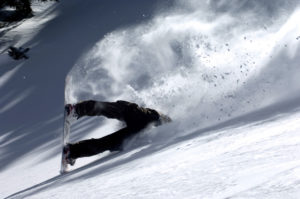 Another injured victim goes uncompensated because of a waiver, despite clear negligence.

This time, an adult snowboarder at Big White. Boarding from one of the easiest runs, Highway 33, down a known path to a parking lot.

Access down the path was permitted by a wide gap in a rope line that is erected and maintained by Big White along ski runs to warn of hazards.

Big White was also responsible for snow removal in the parking lot at the bottom of the path. One morning, while Gary Fillingham and his family were enjoying the mountain, the removal of snow along the bottom part of that path created a sudden, 10 foot drop-off.

The contractor doing that snow removal failed to close the gap in the rope line to warn of the hazard that had been created.

Mr. Fillingham suffered serious injuries when he encountered that sudden drop-off and fell to the parking lot below.

But she dismissed Mr. Fillingham’s lawsuit against Big White because of the waiver.

This is a timely reminder of the unfairness of waivers as we gear up for another ski season in the Okanagan.

It is fair and reasonable that a ski resort be protected from frivolous lawsuits. Skiing and boarding are higher risk activities. We shouldn’t be able to sue for injuries arising from commonly known and understood risks of the activities we choose to participate in.

But it’s a completely different story when the ski resort, itself, causes a dangerous hazard.

Should we be upset with Madam Justice Adair for upholding the waiver in this case? No. She was applying the law.

A change of the law was recommended 23 years ago in an October, 1994 report of the Law Reform Commission of British Columbia. Here is a link to the Executive Summary and Recommendations.

The executive summary notes a lack of public understanding of how powerful waivers are:

“The scope that comprehensive waivers can have is little understood by the public. A belief persists that waivers “are not worth the paper they’re written on” or that they “don’t hold up in court.” Even though this fallacy has been repeatedly contradicted in recent, fairly well-publicized cases in British Columbia, the Commission still received comments in this vein.”

This lack of public understanding continues today. I know that because of feedback to my previous columns on the topic of waivers.

The executive summary points to a serious public safety concern about waivers:

“The concern about public safety arises because comprehensive waivers protect operators not only against frivolous claims, but also from legal responsibility for their own negligence and that of their employees. With potential liability greatly reduced or eliminated, an operator may be slower to correct a dangerous situation or make needed safety improvements, particularly if it involves significant cost.”

Not only are these powerful waivers unfair, but they are dangerous.

Why have the recommendations of the Law Reform Commission not been implemented?

Because we, the public, have not demanded it. Continuing, widespread ignorance about the powerful impact of waivers is getting in the way of what’s right.

Please stand up for a change in the law. Talk to your MLA. Encourage others to read this column and do the same.