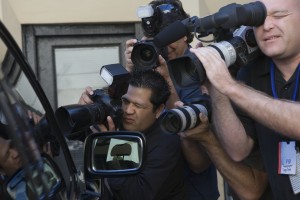 The judge who presided over the sentencing of Rahim Jaffer told the former MP “I’m sure you can recognize a break when you see one.”

It smelled to high heaven. Here was a former federal politician with alleged continuing influence over the government charged with impaired driving and possession of cocaine but a plea bargain resulted in those charges being dropped in favour of a far less severe conviction for careless driving.

That was one heck of a break.

We all know about innocent-until-proven guilty but at the sentencing hearing the Crown and defence lawyers agreed on a statement of fact that suggested that there would have been no problem proving his guilt.

He blew over .08. There was cocaine found in his coat pocket. Why, then, a plea bargain? Was this about political connections?

It wasn’t. In fact, given recent developments, I suspect that political influence might have more likely been exercised against Jaffer instead of in his favour.

It was about the fact that all Canadians have a basic set of rights that we take very, very seriously. We take those rights so seriously that our laws require our judges to acquit in certain circumstances when those rights have been trampled on. It’s not willy nilly.

Judges are required by law to strike a balance to uphold the reputation of our justice system. One basic right requires the police to give you the opportunity to talk to a lawyer before they interrogate you or, as in this case, require you to take a breathalizer test. If the police fail to do that, any evidence they obtain in violation of that right is likely to be disregarded at a trial.

It makes some sense. You have a basic right, the police disregard that right to get evidence, so for the Court to allow that evidence would be unjust. In Jaffer’s case, I understand the lawyer he wanted to talk to called the police station while the breathalizer was being administered but the police inexplicably failed to put the call through to Jaffer.

Other basic rights protect us all from being treated unreasonably by police.

I think we all agree that a strip search is an extreme invasion of our privacy and that it should be avoided unless there are reasonable grounds for conducting one. If the police conduct a strip search for no good reason while arresting you, the court may use acquittal to try to restore the reputation of our justice system that had been sullied by the police.

I understand Jaffer was strip-searched and that there was no reasonable justification for that extreme invasion of his privacy.

In the end, the Crown was faced with the possibility that a trial would result in Jaffer’s outright acquittal.

In the hopes of getting any conviction at all, the Crown entered into negotiations with Jaffer that resulted in his guilty plea to a lesser offence.

The police are very powerful. They walk around with guns. They can arrest you and put you into a cell. If they want to strip search you, there’s absolutely nothing you can do to stop them. You are at their complete mercy.

With few exceptions, it is my view, police officers do the very best job they can and are mindful of our rights, being careful not to trample them. There are exceptions though, as in the case of Jaffer.

I am thankful our system provides consequences for the exceptions. I am comforted that I am less likely to be unfairly subjected to a strip search because of those consequences. Without explanation, the ways of our justice system can seem very unjust.

Unfortunately, the media seems to contribute to the problem, because the strong smell of injustice makes good news. The next time you come across a news story that leads you to question our justice system, please pop me an e-mail and I will attempt to explain the situation properly in one of my columns.