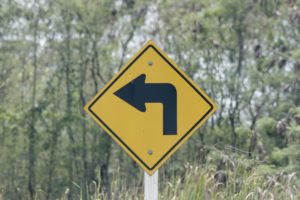 One of the most common crashes:  between a left turning vehicle and a straight through vehicle.  It’s such a common, and often devastating, crash that many intersections undergo expensive upgrades to add an advance left turning light.

One particular crash that haunts me for the sheer tragedy of it occurred a few years ago at the intersection nearest my office.  A pick-up truck turned left, directly into the path of an oncoming transport truck.  The transport truck swerved, saving the life of the pick-up truck driver, but the swerve caused it to careen into and kill a young father who had been patiently waiting for the transport truck to pass so that he could merge onto the highway.

When the light is green, these crashes are complete nonsense.  The left turner simply has to wait until oncoming traffic has cleared before making the turn.

You feel pressured to turn…

But there are vehicles lined up behind you; you feel pressured to go as soon as there is a gap in traffic you might be able to squeeze through.  No.  Don’t.  Even if the grill of a jacked up Ford pick-up truck is framing your rear-view mirror, the driver impatiently honking his horn, calmly wait until you are certain that you can safely complete your turn.

But you’re embarrassed.  Your father would have completed the turn ten times already.  If he was your passenger, he would be fuming about how many times you should have made the turn and insisting that you become more confident with your driving.

“A timid driver can be just as dangerous as an aggressive driver” rings in your ears.

The light has turned yellow…

Ok, finally, the light has turned yellow.  Oncoming drivers will stop and you will finally have your turn.  There is an added pressure, though: you must clear the intersection.  No dilly-dallying allowed.  In moments, the light will be red and cross traffic will have the green.

You have just entered some of the most dangerous moments that can exist in an intersection.

Yes, oncoming drivers must stop unless that stop cannot be made in safety.  This obligation is clearly set out in section 128(1)(a) of the Motor Vehicle Act and is a universally known driving rule.

It is also one of the most universally broken driving rules.

The lead oncoming vehicle is slowing, so obviously the traffic in the other lanes will be able to stop as well, so you “hit it” to clear the intersection.

No.  Please no.  Please wait until you are completely satisfied that traffic in every oncoming lane is going to stop before you put yourself in front of those lanes of traffic.

Ignore the horn that’s blaring behind you.  Ignore the big grill in your rear-view mirror.  All the matters is that you don’t put yourself in front of a vehicle that’s trying to push through that yellow light.

So you sit, and you wait.  Please.  Please sit and wait.

But the vehicles in two of the oncoming lanes have actually come to a complete stop!  Horns are starting to blare from cross traffic!  You have to clear the intersection!

What about the oncoming prick in the third lane who’s hammering the gas?  The rules don’t change when the light turns from yellow to red.  You wait.  Please wait until you are completely satisfied that the traffic in every oncoming lane is going to stop before you put yourself in front of those lanes of traffic.

The June 7, 2016, decision of Severud v. Smit covers this exact situation.  The injured Plaintiff, described by Mr. Justice Saunders as a 38 year old mother of two, was the left turning driver.  It was an established fact at the trial that the light had turned red before the oncoming driver entered the intersection.  The defending insurance company argued that the left turner should share in the blame, and recover less than full, fair compensation for her injuries and losses.

Mr. Justice Saunders noted that the idiot (my word) who blew the red light “…bears an overwhelming degree of responsibility for this collision…”.  In the circumstances, though he agreed that the left turning driver share some fault.

Mr. Justice Saunders’ explanation:  “I conclude that at the point in time when the plaintiff began her turn, the defendant, regardless of whether she was in fact slowing, was close enough in proximity to the intersection and proceeding at such speed that there was not enough distance for the defendant to be able to bring her vehicle to a stop. The plaintiff, having seen the defendant’s vehicle, ought to have anticipated that the defendant might have been about to “run the red”.

The Plaintiff had suffered very serious injuries.  Her compensation was reduced by over $50,000.00 because of the 10% assessment of liability against her.