How can it be that some collision victims recover completely while others are left with life long pain? 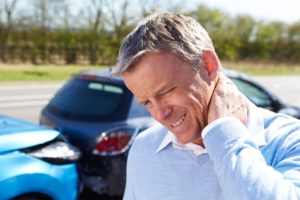 For one, each of us is built differently.

For example, those with long, slender necks are more vulnerable than those with short, beefy ones. Remember Graham, the “ideal crash-proof human” conjured up by a trauma surgeon, a crash expert and an artist?  Follow this link to see what Graham looks like: Here’s what humans might look like if we had evolved to survive car crashes.

And the forces exerted on you in a crash depends on a dizzying list of factors, including the speeds and directions of the vehicles, safety features (which can actually increase damage to occupants) and which seat you are occupying.

And damage to your tissues can be different depending on whether or not you’re braced for, and your particular head and body positioning at the time of, impact.

But, what if you strip away all of those variables. Pretend the exact same forces are exerted on two people with the exact same physical build, in exactly the same way.

Will their injuries and outcomes be exactly the same?

Consider if one is a perfectly healthy, 19 year-old gymnast. The other is me, a deconditioned 48 year-old desk jockey with an elevated BMI.

Neither of us had any pain, stiffness or other symptoms before the crash.

The 19 year-old gets sore after the crash. But with a handful of therapy sessions and a month or two of healing time he’s completely recovered. He feels he’s won the lottery with a $2,500.00 settlement from ICBC.

How could that be?

An x-ray reveals arthritic changes in my neck. Of course it does. I’m 48 years-old!

Those arthritic changes, and my deconditioning, make the difference.

There is more straining and micro-tearing of tissues to an inflexible body, unable to touch my toes, than to someone who can scratch their ear with their big toe.

A complete recovery might still have been possible, though, if not for the arthritic changes.

What would a doctor say if asked what caused my chronic symptoms?

There are three possible answers.

One obvious one is the pre-existing arthritic changes, without which I would have enjoyed a complete recovery.

Another might be the crash. Had it not been for the crash, I would have continued to live pain and headache free.

And finally there might be an attempt to attribute the cause to each contributing factor, perhaps 40% to the crash, 40% to the arthritic changes and 20% to my deconditioning.

How would each of those answers impact on my ICBC claim?

This is one of the least understood aspects of personal injury law, even though the law could not be more clear.

A pre-existing vulnerability is not a “get out of jail free card” for ICBC.

A negligent driver, through their liability insurer ICBC, is responsible to compensate their victim for all injuries and losses that would not have occurred had the collision not occurred.

It is no answer that the injuries and losses would have been less had the victim not been so vulnerable.

And further, “The losses “flowing” from an injury are those losses which the Plaintiff proves, on a balance of probabilities, would not have occurred “but-for” the Defendant’s act…”

So don’t let ICBC tell you, or anyone you care about, that your injuries “should have resolved by now” had it not been for your pre -existing vulnerabilities, and that they are not responsible for the ongoing aftermath of their insured’s negligence.