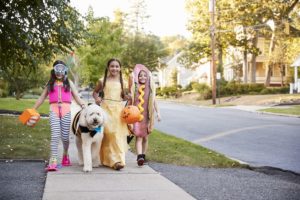 Alcohol doesn’t usually come into the mix until after trick-or-treaters are safely back in their homes.  Except for the moms and dads with laced coffees, keeping warm while following the little ones around!

During the witching hour (or two or three) children are darting from house to house.  Every shred of their attention goes to filling candy bags.  Street safety consciousness goes way down.

When drivers encounter a street congested with throngs of children, we automatically slow to a crawl.  Nobody wants to hurt a child.  And push the speed envelop even a titch and you’ll face the wrath of the mama and papa bears among them.

But please don’t wait until you see throngs of children before you slow down.  We must jack up our level of vigilance and lower our speed everywhere children might be trick-or-treating.

The court decision in Bourne (Guardian ad litem of) v. Anderson,  1997 CarswellBC 667, is a helpful legal precedent for the duty of drivers when there might be children on the road.

The motorist, Ms. Anderson, had been driving through a residential area of Vancouver on a Saturday afternoon.  She was driving at a reduced speed of approximately 40 kms/hour.

But Ms. Anderson was still found at fault.

Because while Geordie was hidden, his nine year old friend and his sister were both in plain view.  And the friend had just run across the street from the same vehicle Georgie later dashed out from.  The driver was thereby warned of the possibility of another child darting across the street.

The court provided the following general statement about motorist safety:  “In my opinion, once the presence of a child or children on a road is known, or should have been known, to the driver of a vehicle proceeding through a residential area where children live, that driver must take special precautions for the safety of the child or children seen, and any other child or children yet unseen whose possible appearance or entrance onto the road is reasonably foreseeable.  The precautions include keeping a sharp look out, perhaps sounding the horn, but more importantly, immediately reducing the speed of the vehicle so as to be able to take evasive actions if required.”

On Halloween, the possibility that a child might dart out onto the road is reasonably foreseeable anywhere children might be trick-or-treating.  Not just on the streets where we notice throngs of children.

We must keep a sharp lookout and reduce our speed so that if a young ghoul pops out from behind a parked car we can take evasive actions.