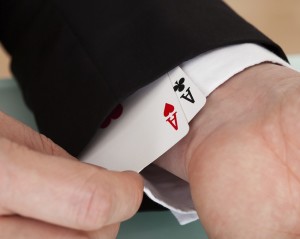 At some point in any negotiation, if you push hard enough, you will come up against the portrayal of a brick wall.  I say “portrayal” because it is impossible to know whether or not you have, in fact, come up against a brick wall “bottom line offer”.

There are various ways to portray, or signal, a bottom line.  On the softer side, you might encounter:

As you push against that portrayal, the signal might become stronger:

“I’ve gone to bat for you with my manager, and that’s the very best I can do for you”; or “I can’t go any lower or I will be selling below cost”.

As you continue to push, you will eventually reach the strongest of signals.   In a retail context, the strongest signal is to actually walk away.  In a personal injury claim negotiation, you might hear:

“Take it or leave it, that’s the most the insurance company will pay.”

No matter how strong the signal, though, you still can’t be sure if you have really, truly, reached the other party’s bottom line.  The best negotiators are the best actors; best able to convince you that they have reached their bottom line when they really haven’t.

But if you walk away, the negotiation is over, right?  Why would someone pretend, in the strongest of terms, to be at their bottom line if the “signal” means an end to the negotiation?

My father tells the story of getting the best deal he’s ever gotten on a vehicle purchase when the salesperson chased him down as he was walking off the lot.  How many of you have had a vendor in Mexico come out of the shop to chase you down the street to offer a better deal after being so very convincing about having given you the very best deal they could?

A purchaser walking away can always walk back.  A vendor can always chase down the purchaser.  Even the strongest of signals might simply be a tactic, of “bluff”, to get to your own bottom line.

This is the most effective of tactics insurance adjusters use in the negotiation of a personal injury claim.  They tell you in the strongest of terms that the amount offered is the most you will ever be offered, “take it or leave it”.  They often throw in some threats such as “If you don’t accept this amount now, the offer will go down”; or lie to you saying: “Either you accept this from me or you will have to go to trial”.

In the 20 years I have been in legal practice, the insurance company’s offer has always, every time, increased after their bluff has been called and a lawyer retained.

With ICBC, the claim gets automatically transferred from one level of adjuster who deals with unrepresented claimants to a higher “litigation” level of adjuster.  I am often contacted by the new adjuster shortly after being retained with the invitation of picking up the negotiation wherever it had left off.

I know that many, many injured victims don’t call the insurance company’s bluff and instead settle for inadequate, unfairly low levels of compensation for their losses.  It’s a very effective negotiation tactic.

How do you protect yourself from this tactic?  How about getting a free, independent evaluation to learn what level of compensation is fair for your injuries and losses.  At least, then, you can make an informed decision about whether to accept whatever bottom line is being offered to you by the insurance company or to take the negotiation to the next level with the assistance of a lawyer.