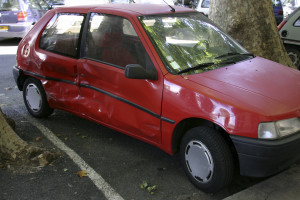 Don’t try to sell me a car that has been in a crash.

My wife’s first new car was a bright red Honda Civic hatchback.  I noticed fading paint on one of the quarter-panels when we first met, which was very apparent because the paint on the rest of the vehicle still looked really good.  She filled me in that the faded paint was where the vehicle had been damaged and repaired.

My own first new car was a 2004 Honda CRV.  During its first year, the back end was damaged.  It was repaired “good as new”.  Over the last few years, the paint at the back end of the car began deteriorating and today there is an area where it has completely peeled off.  There is also a recurring, annoying problem with the back door sensor.

The impacts in these collisions had not been terribly significant.  I am no “car guy”, but I assume that the greater the severity of the impact, the more likely there will be this or that residual problem even if a highly reputed autobody shop has done their best to “put Humpty Dumpty together again”.

So no, don’t bother trying to sell me damaged goods.  Well, unless you sell it to me at a deep discount to compensate me for those annoying issues, the inevitable fading/peeling paint, and perhaps more significant problems that might crop up.  The discount will have to be mighty deep, though.

You can reassure me to the end of the Earth and back again that the car was repaired “even better than new”, because old parts were replaced with new ones, the paint job was of the highest quality, etc.  You might even be right.  I’m not going to believe you, though, because of my personal experience.  Most others won’t either.  You will have to accept a discount or not sell your car.

The loss of value of a vehicle resulting from a crash, which arises from a loss of consumer confidence in the repaired “Humpty Dumpty”, is called “accelerated depreciation”.  My brand new CRV suffered immediate depreciation of value as soon as I drove it off the lot.  There was another jump of depreciation as soon as it had been in a crash.

I plan on hanging onto my CRV for another few years yet, hoping to pass it on to be the “children’s car” as they get older.  We might drive it until it dies, in which case the “accelerated depreciation” loss of value is one that will never cost me money because I will never be in a position of trying to sell it.

Whether or not I choose to sell it, the vehicle “asset” that I am driving around is, in fact, less valuable than it would have been had the crash not occurred.  That is a loss.  Not surprisingly, the law says that if someone inflicts that loss on you, there is a right of fair compensation.

At what point, though, is the loss assessed?  The law says the loss is assessed as of the time the loss was inflicted.  This is an important point, because the difference in market value to my 12 year old CRV is far less than it was when the crash occurred.

I include this “accelerated depreciation” loss along with the claim for fair compensation for injuries, income losses and expenses that I pursue on behalf of my injured clients.  What if, though, there is no injury claim?  What if your vehicle is damaged in a crash and you were not injured?  Insurance covers the expense of putting Humpty Dumpty together again.  What about the accelerated depreciation loss to the value of your vehicle?

A reader posed this exact question to me recently.  I provided him with the name of a vehicle appraiser (necessary to prove the amount of the loss) along with a link to on-line information about how to pursue a Small Claims lawsuit against the offending driver.  If the offending driver’s liability insurance company, ICBC, won’t compensate this loss willingly, Small Claims provides an excellent tool to extract fairness.

E-mail me if you would like for me to send the same materials to you.