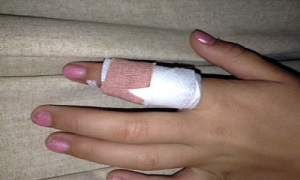 I’m camping with my family in a lovely campground in Deception Pass, Washington.  The peace and tranquility is broken only by the periodic fly by of naval jets.  It’s quite comical, actually.

This camping trip’s “most memorable event” so far is Morgan, my ten year old daughter, slicing into her finger with the insanely sharp pocket knife she got for Christmas this year.  What a jerk, the plump, jolly fellow who chose that gift for my little girl!

It was a good slice.  She came into our little travel trailer, crying.  Twenty-six year old step-sister, Nikki, comforted her while averting her eyes from the gash.

My immediate thought was of taking her for stitches.  It has been too many years since my last first aid training.  I puzzled through the options and settled on keeping the cut clean and the finger straight, because stitches didn’t seem necessary to hold the flesh together.

I wrapped that finger with a bulbous mass of dressing, using materials we had brought with us to change the dressing for Bob, the 3-month-old boil on my right butt cheek.  Yes, we named him.  Too much information?

After the medical emergency was taken care of, little Morgan’s legal rights took centre stage.  Morgan was injured; I am a personal injury lawyer.  The ghastly injury must not go uncompensated!

Some of you might be wanting to “blame the victim”.  The ten year old ought to have taken more care with that viciously sharp knife?  Come on.  If anyone is to blame, it’s not the little princess who wears pink every chance she gets and was trying to make a pretty wood carving for her daddy!

Some of you might be wanting to “blame the other victim”.  The parents who failed to properly train Morgan in the use of the knife, and then failed to properly supervise her.  Yes, I agree.  To some degree, her mother is definitely at fault.

Who is most at fault, though?  Of course, it’s the plump, jolly moron who put a dangerously sharp knife into the hands of a ten year old “little princess”.  A recipe for disaster.

If I was referring to Santa Clause, it would be high time that he get his due.  How often does he, effectively, get away with murder?  All those drum sets, annoying talking dolls, stupid board games, gym passes, vacuum cleaners, the list goes on and on.

No, it wasn’t Santa this time.  The plump, jolly culprit was me.

Is there a lawsuit brewing?  The gash is healing nicely and will be forgotten within another day or two.  Had she been left with a  permanent injury, she would have until her 21st birthday to decide whether or not to bring a lawsuit.

In most circumstances, a child has up to two years after her 19th birthday to commence a lawsuit pertaining to injuries suffered while she was a child.  For some claims, such as child sexual abuse, the deadline is extended indefinitely.

If the negligent parent had liability insurance, such as in a car crash, it would be crazy not to pursue an injury claim.  Not to do so is simply a hefty financial gift to the insurance company that collected liability insurance premiums to cover a risk they don’t have to pay out on.

Absent liability insurance, it’s a serious matter of a parent paying to compensate a child for injuries (physical or otherwise) that would not have occurred had Mom or Dad done the important job of being a good parent.

If the relationship has remained positive, a lawsuit is unlikely.  When everyone is playing on the same team, there’s nothing to be gained from passing money from one member of the team to another.

For a child who realizes on achieving adulthood that her childhood was an abusive one, however, a lawsuit can turn a lifetime of power imbalance on its ear and achieve a cathartic justice beyond compare.