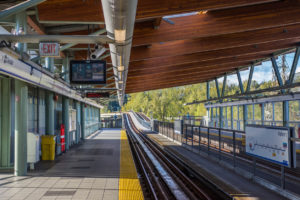 mix of Arabic and some other language I wasn’t understanding…He raised his hand and began saying he was going to kill me…He was using horrific words as he was aggressively making actions when he tried to grab my head and shove it to his crotch”.

This horrific scene played out on a Vancouver Skytrain on Dec. 4, 2017. The victim: an 18 year old Muslim woman wearing a hijab. She shared these events on Facebook.

“I watched as others watched the man verbally assault me when out of nowhere he strikes me across the face. And everyone watched as he did so. Everyone stayed seated and did not utter a word…”

Then 21 year old Jake Taylor, a Nelson raised rugby player, stepped up. He pushed the guy away and stayed in front of her until the man got off the train.

A 46 year old man “of no fixed address” was later arrested.

Towards whom do you feel more anger?

The attacker? Not making excuses here, but at least his homelessness and conduct point to mental health challenges.

Or those who did nothing while watching the scene unfold? No-one tapped the yellow alert strip, called or texted authorities, or even opened their mouths in objection.

Our laws do not require bystanders to intervene. It is only our moral code that might compel us into action.

But our moral code obviously isn’t enough. It isn’t enough to stop bullies on the playground any more than on public transit and elsewhere.

Perhaps our laws should change. American law professor Amos Guiora, a child of Holocaust survivors, thinks so. He wrote a book arguing that bystander inaction should be considered a crime.

But his proposed law would not require bystanders to put themselves in physical danger. Simply to alert authorities.

He makes a compelling point that such a law is an urgent necessity, particularly in cases of sexual assault, where even minimal intervention can make such a huge difference but so many make the horrible choice of “looking away”.

We can improve on our laws. All it takes is the political will to do so.

If you think that Canada should join dozens of other countries including France, Germany, Greece, Italy and Brazil, make your voice known to your local Member of Parliament.

Next week I intend to write about how the civil law handles situations where physical bystander intervention results in injury. The rugby player in this case intervened in a very sensible, measured way that did not cause injury to the abuser.

But what if things had been different? Does a bystander who physically intervenes face the risk of an injury lawsuit?