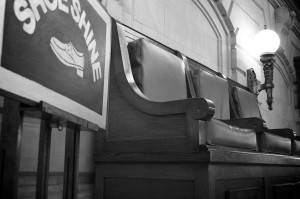 Negotiations, in my experience, are more of an art than a science.  Having embarked on an uninvited negotiation that started with some sort of spooge being squirted on my wife’s boots, I was less than impressed with the artistry of the fellow my wife and I encountered on a New Orleans street corner this past week.

Faced with generous gobs of goo on the toes of each of my wife’s boots, I saw little alternative but to take the fellow up on his offer to smear them off.  No price was mentioned, by the way, for this boot polishing “service”.

After taking the less than 60 seconds it took to smear off the mess, the fellow announced his price of $40.00.

I no longer do legal work by the hour, but the hourly rate I used to charge doesn’t hold a candle to this guy’s rate.  At $40.00 per minute, I’d say he “Charges like a wounded bull”.

My wife, who became uncomfortable immediately on the gobs of goo landing on her boots, or perhaps before that, “abandoned ship” and headed across the street when it became apparent that I wasn’t about to reach into my pocket to match his demand.

I politely reminded the fellow that no rate had been agreed upon, and that I would not have agreed to pay anything had I been given the choice.

I did find the experience oddly amusing and had taken a picture; surely, the experience held some value.  Feeling compelled to make an offer of some amount of money, I told him that I would pay him $5.00.

This was not a welcome negotiating move.  The fellow responded with offended indignation that included moving his much larger chest close to mine, enunciating his words with an emphatic flare that caused me to benefit from bits of his mouth lubrication, and taking the gob-dispenser into his hand with a comment that he would use it as a “shampoo”.

On the one hand, the larger statured man seemed to have little to lose and I didn’t relish the prospect of having my evening ruined by being thumped.  On the other hand, we were on a busy street corner and he wasn’t going to get any money out of me at all unless I willingly handed it over.

Maximizing his negotiating position, the near toothless fellow clarified our physical inequity stating, as if to convince me into submission: “I’m a 400 pound [insert racial indicator here] man”.

He was being a bully.  I felt confident that I understood where he was coming from.  All he wanted was a hand-out, and we both knew that even a very small hand out was much more than he was going to get from imposing his size or “shampoo” against me.

My wife was waiting for me, safely,  on the other side of the street.  She’s not one for confrontation.  Not many people are, in my experience.  We will avoid the bully at almost any cost, and in most life circumstances we don’t have enough knowledge of the playing field nor the confidence to stare a bully down.

Fortunately, unless you are on the streets of New Orleans facing a big fellow with a handful of spooge, we all have access to the great equalizer of bullies: the Supreme Court of British Columbia.  However mammoth and imposing the bully may seem, our court system provides the hammer that can bring even the strongest bully to justice.

Stand tall.  Don’t let yourself be the cowering victim on the other side of the street when it comes to your legal rights.  Oh, and I strongly recommend that you look the other way if a stranger approaches you on the streets of New Orleans.